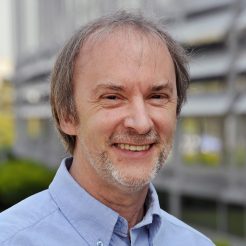 Ray Owens obtained his PhD in biochemistry at the University of Cambridge, UK. After postdoctoral work in London and Oxford, he joined Celltech, the UK’s first biotechnology company and became head of new target discovery. In 2002, Ray moved to the University of Oxford to run the Oxford Protein Production Facility (OPPF) the UK’s first structural proteomics project.

He is currently Professor of Molecular biology in the Structural Biology Division of the Nuffield Department of Medicine, University of Oxford, and leads the Nanobody and Protein Production UK projects in the Rosalind Franklin Institute.