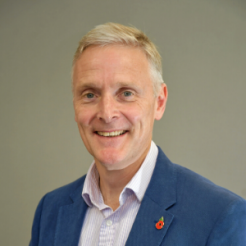 Paul has worked in the life science sector for over 20 years. During this time, he has held a number of senior operational roles, been a corporate financier and a venture capitalist. As Chief Operating Officer at The Franklin, Paul leads the operations team, and oversees the delivery of the vision of the Franklin alongside Director Jim Naismith and Chair Vivienne Cox.

Paul was previously Head of Strategy and member of the Executive Leadership Team at BTG plc, a FTSE 250 healthcare company acquired for $4.2bn by Boston Scientific in August 2019. In addition to strategic planning, this role encompassed Business Development (including Mergers and Acquisitions and Strategic Investments) and Digital Health. Previous roles at BTG included Head of the Interventional Vascular business unit, during which time Paul oversaw the successful clinical development, FDA approval and US launch of Varithena. Paul’s initial role at BTG was in the corporate venturing division, where he led investments in early stage life science companies in Europe and the US.

Prior to joining BTG, Paul was Finance Director at Profiad, a start-up company, specialising in primary care clinical trials, spun out of Glaxo Wellcome.

Before Profiad, Paul worked as a corporate financier in Ernst & Young’s Life Sciences practice where we worked primarily in advising start-up companies on fundraising and partnering.

Paul has a degree and doctorate (in Cell Biology) from the University of Oxford. He is also a chartered accountant and spent his early business career specialising in corporate recovery and turnaround consulting at Arthur Andersen.

Paul lives with his family in Farmoor, where he can often be found birdwatching at and around the reservoir. Paul is also a keen wildlife photographer and artist and likes to keep fit by running.