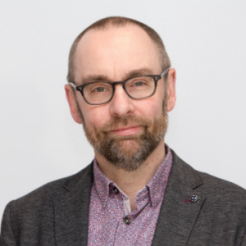 Tony Wood is Senior Vice President and Head of Medicinal Science and Technology at GlaxoSmithKline. He has a BSc in chemistry and a PhD in organic synthesis from Newcastle University. After a postdoc at Imperial College, he spent 25 years with Pfizer in the UK and the US, before moving to his current role at GSK in 2017.

He is one of the world’s pre-eminent medicinal chemists, and has the rare distinction of inventing a licensed medicine, the HIV antiviral maraviroc (Celsentri/Selzentry). This was the first mammalian host protein-targeted anti-HIV drug to reach the market. As well as being a pioneer of structure-based drug design to overcome problems of resistance, he has striven to advance strategies in medicinal chemistry design, including ligand efficiency and lipophilic efficiency, structural-property relationships for toxicity, and the use of chemoinformatics to inform molecule and library design.