Professor Angus Kirkland and Dr Judy Kim have been working as part of an international team using JEOL instruments at the electron Physical Sciences Imaging Centre at Diamond, who have applied electron ptychography to biological structures for the first time. This method published in Nature Communications (1) allows for superior imaging of biological samples with improved information transfer at all spatial frequencies.

To highlight these improvements, this technique was compared with conventional phase contrast transmission electron microscopy to assess the differences in data quality between the two methodologies. In addition to providing higher quality phase data, ptychography also potentially requires smaller particle numbers for 3D reconstruction, which means it could be developed further and used in combination with other techniques, such as soft landing biological mass spectrometry.

This paper demonstrates a methodology for electron ptychography, which will allow studies of many biologically important structures as it can be applied to heterogeneous samples with high contrast over larger fields of view. As applied, ptychography takes a number of diffraction patterns, from overlapping probe positions on the sample and reconstructs the amplitude and phase of the object. Other applications of ptychography are well established using both X-rays and visible light.

This new application of ptychography provides tuneable, continuous wide-band information transfer including low spatial frequencies that are inaccessible using conventional phase contrast imaging. This ability to tune the instruments to the correct frequency enables maximum phase contrast to be achieved for each sample, therefore allowing greater detail to be observed. 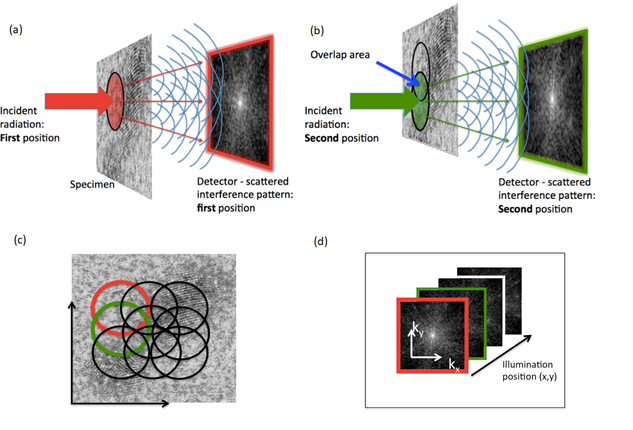 Collection of a ptychographic imaging data set in the simplest single-aperture configuration. (a) Coherent illumination incident from the left is locally confined onto an area of the specimen. A detector downstream of the specimen records an interference pattern. (b) The beam is shifted (in this case, downwards) and a second pattern is recorded. (c) A whole ptychographic data set uses many overlapping regions of illumination. (d) The entire data set is four-dimensional: for each 2D illumination position (x,y), there is a 2D diffraction pattern (kx,ky). Image credit: 22ms22 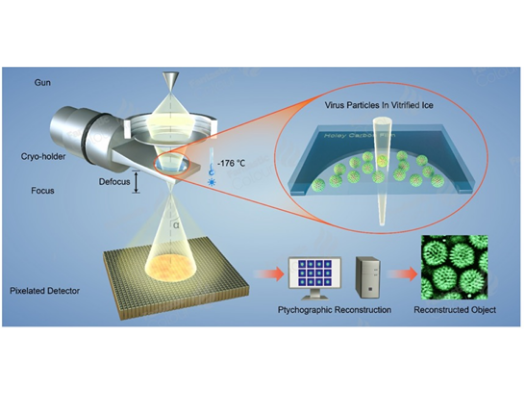 Schematic diagram of the optical configuration.

In this paper, the Franklin team and collaborators used samples of double-layered rotavirus and non-symmetric immature HIV-1 particles to demonstrate the technique under cryo-conditions. The viruses show excellent phase contrast and improved information transfer even at low spatial frequencies under low dose conditions. A resin-embedded cell infected with adenovirus was also imaged in this study to provide further evidence of the tunability of this method and to confirm that this method can also be applied to micron wide fields of view. 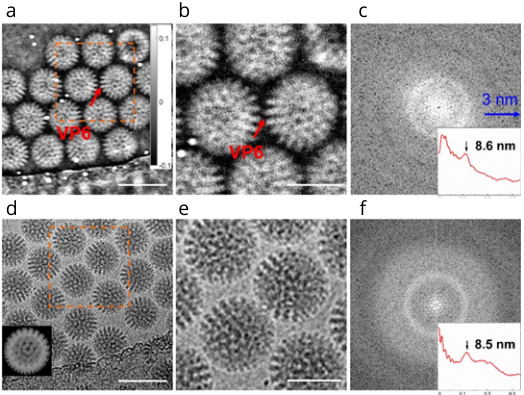 (a) Ptychographic reconstructed phase at a dose of 22.8 e/Å2 and (d) defocused TEM images at dose of 35 e/Å2 of rotavirus DLPs in vitrified ice. (b and e) Magnified views of sub areas marked in (a and d) with orange squares, respectively. The red arrows in (a and b) indicate the capsid trimers of viral protein 6 (VP6). The ~ 6 nm gold particles are displayed as bright features in (a and b) following established convention where a phase advance (+) is displayed as white51 and appears as a contrast reversal compared to conventional TEM images. (c and f) Power spectra calculated from (a and d), respectively including radial averages (Inset). A rotavirus DLP model is shown in (d Inset). The gray scale bar in (a) is in radians and applies to (a and b). Scale bars: 100 nm in (a and d), 50 nm in (b and e).

Expanding the use of ptychography

This research demonstrates that more efficient phase recovery is possible using ptychography providing a higher signal-to-noise ratio and greater contrast than cryo-TEM (Transmission Electron Microscopy). This potentially dramatically reduces the number of particles required for reconstruction of 3D structures, which would allow classification of heterogeneous specimens at low concentrations or structures with low symmetry.

This could have important applications for the examination of rare and exotic samples. In addition, it could be used in conjunction with other techniques, such as soft landing of selected species from biological mass spectrometry. Soft landing is technique by which biological mass spectrometry is used to remove molecular ions and deposit them into liquids, which allows for the non-destructive purification and separation of specific molecular ions from a sample. This combinatorial approach is at an early stage, but would enable teams in the Franklin team to combine multiple technologies to provide rich data on rare specimens.