We are delighted to announce the election of Professor James Naismith FMedSci to the position of Vice President at the Academy of Medical Sciences today.

In this role, Jim will represent the expertise of non-clinical disciplines in the delivery of our 10-year strategy. The Vice President serves a four-year term, and as one of six Honorary Officers, Jim will be part of the Academy’s key decision-making group. 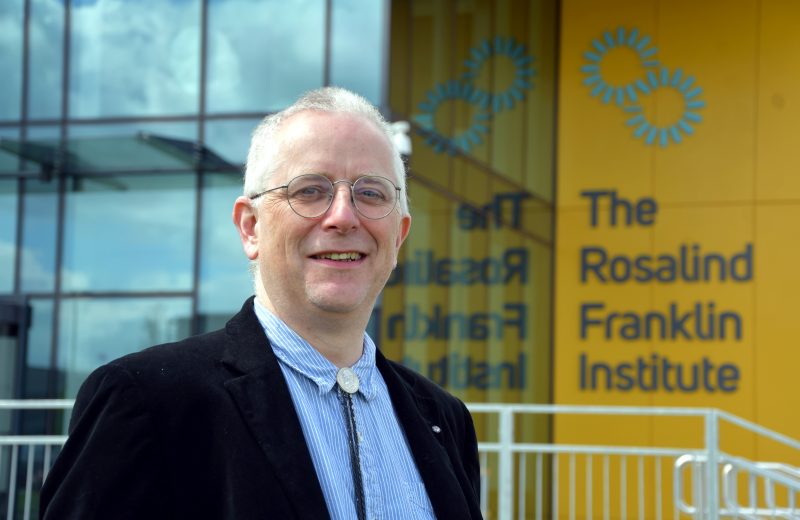 Professor James Naismith outside of the Rosalind Franklin Institute

As Director of the Rosalind Franklin Institute, Jim oversees the development of new technologies to tackle health challenges, from antimicrobial resistance to emerging diseases. He is a world leading expert in structural biology, blending structural analysis with mechanistic study to develop new approaches to answer chemical problems in biology.

“I look forward to trying to repay the trust shown in me by my election to the Academy’s Honorary Officers. Medical science is vitally important to the health, wealth and wellbeing of the UK and the wider world. The Academy has been key to thinking about how these impacts are realised and championing diversity in medical science careers.

“I want to pay tribute to Professor Michael Malim FMedSci who has been such a success in his term. I am delighted to take over the role from Michael to work with Professor Dame Anne Johnson PMedSci, our Academy President, the Honorary Officers, the wider Fellowship and the fantastic team of professional staff.”

“I am very pleased to welcome Professor James Naismith FMedSci to the Academy’s Honorary Officers, as Vice President (Non-Clinical). Jim is a distinguished researcher whose broad experience means he is well placed to support the scientific leaders of the future and engage our whole community with the work of the Academy. He will have much to contribute as we deliver the priorities in our ambitious 10-year strategy, to achieve good health for all supported by the best research and evidence. I am very much looking forward to working with him in the coming years.

“I would also like to thank Professor Michael Malim FMedSci, who has served as Vice President (Non-Clinical) for the past four years. He has engaged widely with many of the Academy’s activities, including supporting the Academy’s work through the COVID-19 pandemic, and contributing his ongoing service on the Academy of Medical Sciences Professorship Scheme Panel, on which he recently assumed responsibility as the interim Chair.”

Jim will take up his position as Vice President (Non-Clinical) with effect from the Academy’s Annual General Meeting on Tuesday 6 December 2022.