Drug resistant bacteria are an urgent global health problem. One of the ways bacteria evade the human immune response is by shielding themselves inside a shell or capsule. This capsule is composed of sugars called Extracellular Polysaccharides (EPS). Bacteria make EPS to measure, but how they do this has remained a mystery. Understanding how this machinery work is part of the fight against drug resistant bacteria.

Scientists at the Rosalind Franklin Institute, working as part of an international team with Canadian scientists, have uncovered the atomic detail of how the length control system works. Colleagues at Oxford University were then able to measure the weights of the components in unprecedented detail.

It has long been suspected that Wzc, a cell membrane protein, is the master regulator of this EPS formation but the mechanism by which it is able to regulate this process has not been understood. However this work, recently published in the Nature Communications, has revealed the mechanism for this regulation.

Professor James Naismith, Director of the Franklin and the senior author on the paper, said: “The Wzc protein has been understood to be essential for the regulation of EPSs formation for some time now. This work shows that when the protein is phosphorylated it falls apart into eight building blocks, when the phosphate is removed it re-assembles into a single octamer (8 side shape). By cycling between the assembled and dissembled states, the machinery which makes the polymers, starts and stops thus controlling the process. It reminds me of a Lego machine.”

The octamer of Wzc contains has a large chamber in the centre formed by transmembrane helices. The chamber is where the lipid-linked oligosaccharides are assembled and move through. The research required several techniques and approaches, including electron microscopy, cell biology, chemistry and mass spectrometry, to fully understand these structures; an illustration of the multidisciplinary work needed for these big challenges. 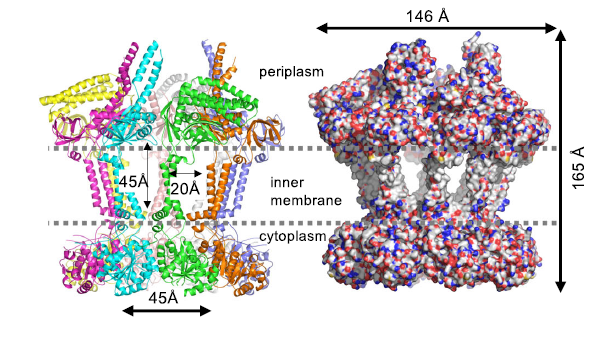 At the C-terminus (inside the cell), the tail of Wzc adds to phosphate groups to itself. When there are enough phosphates, the octamer becomes unstable. As a result the octamer falls apart into monomer. This state formation is stable until Wzb removes the phosphate and the monomers can re-assemble into an octamer.

Read the paper ‘The molecular basis of regulation of bacterial capsule assembly by Wzc’ in Nature Communications here.