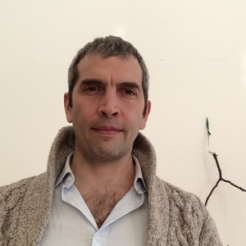 Ben Davis got his B.A. (1993) and D.Phil. (1996) from the University of Oxford. During this time he learnt the beauty of carbohydrate chemistry under the supervision of Professor George Fleet. He then spent two years as a postdoctoral fellow in the laboratory of Professor Bryan Jones at the University of Toronto, exploring protein chemistry and biocatalysis.

In 1998 he returned to the U.K. to take up a lectureship at the University of Durham. In the autumn of 2001 he moved to the Dyson Perrins Laboratory, University of Oxford and received a fellowship at Pembroke College, Oxford. He was promoted to Full Professor in 2005.

Ben was elected a Fellow of the Royal Society in 2015, and the Academy of Medical Sciences in 2019.

Ben is Science Director of the Next Generation Chemistry theme.

Click here to read about The Davis Group in more detail