Piecing together a puzzle in protein damage

Home → Latest News → Piecing together a puzzle in protein damage

Researchers based at The Rosalind Franklin Institute and the University of Oxford led by Professor Ben Davis have unravelled a mystery in damaged proteins. This work also incidentally solved a 20-year-old conundrum of an ‘orphan’ family of proteins (called LanCLs) that are found in all living organisms but whose function was previously unknown. The work was completed in collaboration with researchers from the University of Illinois and the UK Catalysis Hub, and is published in Cell today.

As we age, and when certain pathogens attack us, marks are left on the proteins in our bodies. The UK-US team has now found that key enzymes called kinases – vital to many signalling and regulatory functions within mammals – become more active rather than less when damaged by this process. This suggests that cell signalling could be altered or disrupted by aging or pathogen attack.

They have also now discovered that the LanCLs are capable of ‘trapping’ and removing such damaged kinases. Thanks to this work, failure to remove these damaged kinases by LanCLs is now thought to be critical to the survival of the organism, as knock-out gene experiments suggest that there is a high mortality in mice which do not possess these proteins. 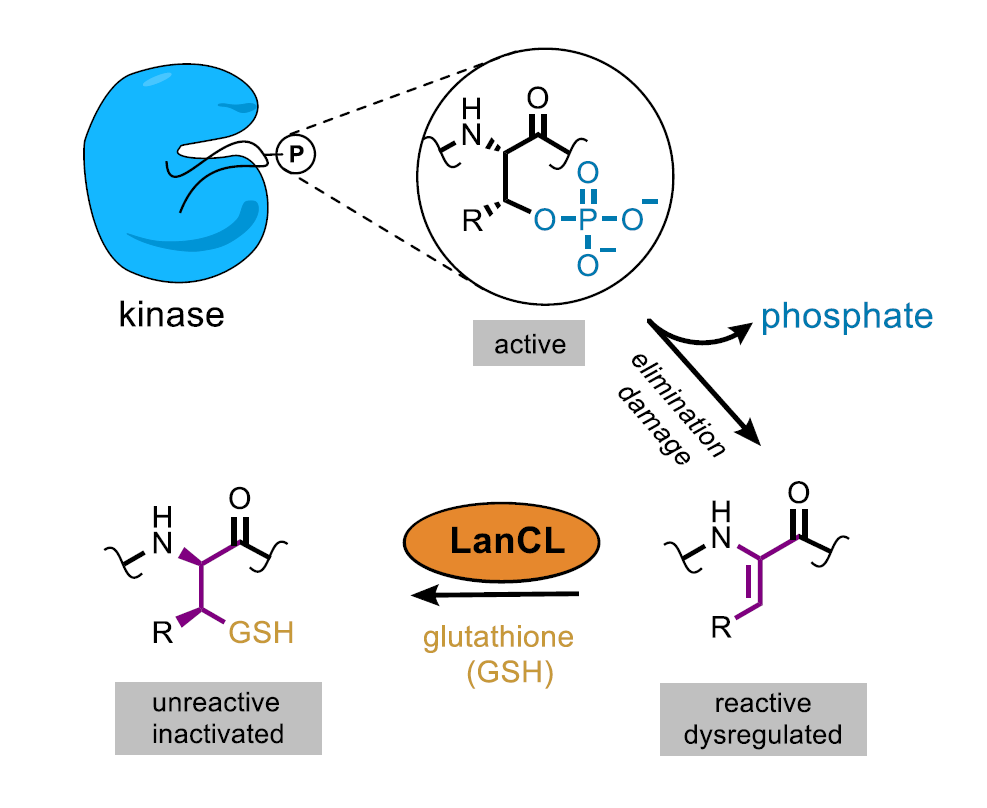 One of the most curious forms of protein damage is the creation of a carbon-carbon double bond C=C, a process known to chemists as an ‘elimination’ reaction. Although some of our damaged proteins are eventually remade and replaced, some are not (or may be replaced only slowly) and may function incorrectly when damaged. For many years the consequences of this ‘elimination reaction’ damage and how cells respond have been unclear.

Enzymes known as LanC proteins were first identified in bacteria. Similar proteins—called LanC-like or LanCL—have been since been found in many organisms, and are thought to be ubiquitous within animal cells, but their function was unknown.

Researchers at the Nair lab in the Department of Biochemistry at the University of Illinois had previously solved the structure of one of these LanC-containing proteins in bacteria- noticing that the protein was bound to a kinase.

This discovery led the Illinois research team to begin to explore whether LanCL proteins could also bind to kinases, even in those found in mammalian cells. “We saw that they were able to bind to many kinases, including AKT and mTOR, and all of a sudden the pieces of the puzzle started forming a picture,” Professor Wilfred van der Donk, a professor of chemistry and investigator of the Howard Hughes Medical Institute, University of Illinois, US, said.

Meanwhile Professor Ben Davis, Science Director for Next Generation Chemistry at The Franklin, working with Professor Graham Hutchings from the UK Catalysis Hub, showed that a specific type of damage in kinases could cause them to become activated. Scientists had previously assumed that such damaged proteins would be inactive.

The Franklin and Illinois researchers were subsequently able to show that LanCL performs a reaction that traps this damage by adding a small molecule called glutathione. “We realized that when the LanCL proteins are absent, the cell has a big problem because there are active proteins floating around that need to be turned off,” Professor van der Donk said.

Professor Davis said “We had been working on kinases separately to the US team, and had seen that when we precisely modify these proteins to explore the effect of this mode of damage they showed some really unusual activity, becoming more active, rather than less. This was also affected by then ‘trapping’ this damage. The news that the Illinois team had protein with apparently no function but with binding pockets that might do the same thing was a one of those beautiful ‘bing!’ moments in science. Coming together with our collective findings, and using our shared tools in protein function to help solve this mystery has been a wonderful – and fun – example of international collaboration. Our next steps to explore this chemistry and control this damage ‘in vivo’ are intriguing.”

The researchers are interested in understanding the role of these proteins and making a complete list of all the possible targets of LanCLs. “When you have abnormal kinases, it can cause all kinds of problems, including cancer. LanCL proteins eliminate these damaged kinases and it is possible that they also affect other proteins that we are not aware of. We need to connect their cellular functions to the results we saw in the mice,” said Professor Jie Chen, a Professor of Cell and Developmental Biology at University of Illinois, USA.

The paper “LanCLs add glutathione to dehydroamino acids generated at phosphorylated sites in the proteome” was published in Cell and can be found at 10.1016/j.cell.2021.04.001.

1.      The research was funded by the Howard Hughes Medical Institute, the National Institutes of Health, the Biotechnology and Biological Sciences Research Council with AstraZeneca, the Engineering and Physical Sciences Research Council via both the Franklin Institute and the UK Catalysis Hub and also with Pfizer, the EU Horizon 2020 Programme under the Marie Sklodowska-Curie program, the Felix Foundation.

2.      The Rosalind Franklin Institute
The Rosalind Franklin Institute is a national institute dedicated to transforming life science through interdisciplinary research and technology development. The Institute brings together researchers in life, physical science, and engineering, to develop disruptive new technologies designed to tackle major challenges in health and life sciences. Focussing initially on five major research themes, the Institute aims to have a significant impact in imaging, diagnostics, drug development, and many more fields. The Franklin is funded through the UK Research and Innovation through the Engineering and Physical Sciences Research Council (EPSRC). The Institute is an independent organisation founded by the UK Research and Innovation, ten UK universities, and Diamond Light Source, with its central hub at the Harwell Science and Innovation Campus.The Rosalind Franklin Institute is a company limited by guarantee registered in England and Wales, registration number 11266143. We are a Registered Charity, number 1179810.Twitter: @RosFrankInst www.rfi.ac.uk

3.      The University of Illinois Urbana-Champaign

Since its founding in 1867, the University of Illinois Urbana-Champaign has earned a reputation as a world-class leader in research, teaching and public engagement. With a land-grant heritage as a foundation, Illinois pioneers innovative research that tackles global problems and expands the human experience. The university’s transformative learning experiences, in and out of the classroom, are designed to produce alumni who desire to make a significant societal impact. The university is charged by the state to enhance the lives of citizens in Illinois, across the nation and around the world through leadership in learning, discovery, engagement and economic development.