The Institute aims to better visualise the inner workings of life, and to draw new understanding from this, is one of the reasons we are named in honour of Rosalind Franklin. A great experimental scientist, Franklin worked on a number of diverse scientific problems, most famously DNA, bringing incredible experimental skill, technological expertise and knowledge from across the sciences.

Here, Professor Patricia Fara, President of the British Society for the History of Science (2016-18), Clare College, University of Cambridge, writes on the life and work of Rosalind Franklin, a great figure in interdisciplinary science.

In addition, to mark 100 years since the birth of Rosalind Franklin, we recorded a podcast series about her life, work and legacy – listen here.

Since her early death at the age of 37, Rosalind Franklin has become mythologised as the victim of male prejudice, the unsung heroine who took the crucial X-ray photograph enabling James Watson and Francis Crick to build their double helix model of DNA, and was unjustly deprived of a Nobel Prize. She would neither have recognised nor endorsed this soundbite description. Franklin regarded herself first and foremost not as a woman, but as a scientist, and her DNA research occupied a relatively brief period in her successful career working on a variety of topics. In particular, on top of her famous investigations into DNA, she also made foundational contributions to modern understandings of coal, graphite and viruses. 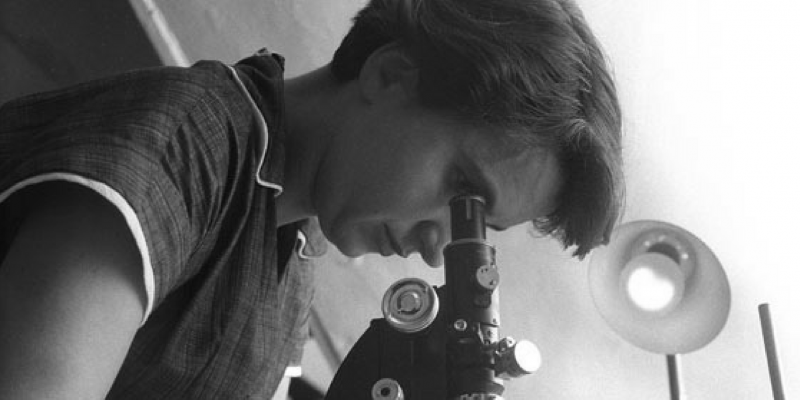 Franklin’s surviving letters confirm the testimony of friends and family that she was a person of intense feelings and intelligence who was committed to scientific research but also fully enjoyed leisure activities – sports, sewing, travelling, entertaining. Expecting the high standards from others that she constantly demanded of herself, she prompted dislike as well as deep loyalty from colleagues. Throughout her life, her membership of a distinguished and extended close-knit Anglo-Jewish network based in West London remained of great importance to her: even though she was agnostic by inclination, she was proud of her Jewish identity. Determined to pursue an intellectual career from a young age, Franklin excelled at most subjects (except music), and was an exceptionally high-performing student who won numerous prizes, yet – like many young women – often privately lacked confidence in her own abilities, and was particularly apprehensive about examinations.

Franklin studied chemistry at Cambridge – although as a woman, she was not allowed to graduate – and subsequently engaged in national war work by joining the British Coal Utilisation Research Association in 1942. Using helium, she studied the porosity of coal, concluding that as the temperature increases, substances are expelled in order of molecular size. Her findings were valuable for predicting fuel performance and for manufacturing gas masks, and in 1945 Cambridge University awarded her a PhD.

After the War ended, Franklin gained a postdoctoral research position in a Parisian public chemistry laboratory through her close Cambridge friend, Adrienne Weill. Already a fluent French speaker, she experienced what was perhaps the happiest period of her life, working from 1947 to 1950 with Jacques Mering, who taught her the techniques of X-ray crystallography. Rather than analysing regular crystals, he specialised in amorphous substances such as nylon, and she applied his methods to examine the structure of coals and their transformation into graphite. This work was both practically and theoretically difficult, and her original scholarly papers remain significant in this field. 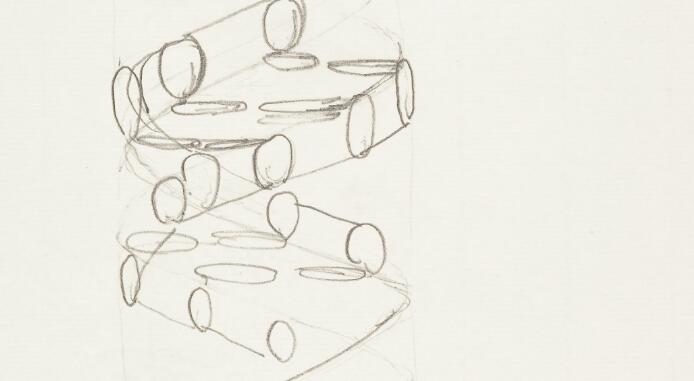 A sketch of the helical structure of DNA, by Francis Crick. Original held by the Wellcome Library, ref PPCRI/H/1/16.

Missing England, after some hesitation she decided to accept the offer of a research fellowship at King’s College London. She was originally employed to study the molecular structure of proteins and lipids in solution, but the director John Randall reassigned her to work on DNA fibres, assisted by a PhD student, Ray Gosling. Maurice Wilkins was also involved in the DNA project, but from the outset, Randall failed to clarify the official relationship between them, which led to constant antagonism.

Franklin discovered that in dry conditions, the DNA molecule is short and fat; she called it the A form, to distinguish it from the long thin B form present during humidity. While Wilkins took over form B, which appeared to be helical, Franklin focussed on the more problematic A variety; under her direction Gosling took the crucial X-ray photograph 51, which looks like a simple cross but was technically extremely hard to obtain. By early 1953, Franklin had drafted papers suggesting that both forms included two helices, but had already accepted a position at Birkbeck College to escape from her increasingly intolerable situation. In the meantime, unknown to her, Wilkins had shown photograph 51 to Watson, who before Franklin’s articles had been published, incorporated her data to construct the successful double helix model with Crick at Cambridge.

This notoriously unpleasant and complex chain of events was mired in personal misunderstandings, resentments and ambitions, but also reflected contrasting approaches to scientific research. Whereas Franklin adhered to a methodological ideology, Crick and Watson built models as exploratory tools, without waiting until all the data had been compiled. Indeed, in their first brief announcement in Nature¸ Crick and Watson supplied no supporting experimental evidence other than Gosling and Franklin’s photograph 51. According to Watson’s account in The Double Helix (1968), the Cambridge team was willing to cut corners in the interests of elucidating DNA’s molecular structure; however, other scientists denied being aware of any such competitive race to be first, and many shared Franklin’s reservations.

In March 1953, several weeks before Crick and Watson published their findings in Nature, Franklin moved to John Bernal’s laboratory at Birkbeck College, where she worked closely with Aaron Klug. Benefitting from her crystallographic expertise, she explored the structure of RNA in the tobacco mosaic virus. In her first major publications on this new topic, she argued against the prevailing view that virus particles were different lengths, and she was later proved to be correct.

After diversifying to investigate other viruses, she successfully won 3 years of American funding, the largest award ever allocated to Birkbeck. Franklin also embarked on controversial research into live polio virus, but illness prevented her from completing the project. She was diagnosed with ovarian cancer in 1956 shortly after a work trip to California, and received surgery. Although she did return to the laboratory, she became increasingly weak, and was cared for by her family until she died.

Although, of course, it is impossible to be certain of further successes if she had lived longer, it does seem relevant that Klug was later awarded a Nobel Prize in chemistry for the project they had begun together. But she had already published almost thirty research articles, and so would undoubtedly have maintained and augmented her high reputation as a meticulous and innovative research scientist.

More information about the life of Rosalind Franklin can be found from the following sources;

Read
Your choice regarding cookies on this site
We use cookies to optimise site functionality and give you the best possible experience.