A new study by scientists at the Rosalind Franklin Institute explores the role of boron in biology, revealing a host of uses for a chemical element that is little-studied in this context.

While boron has long been acknowledged as a key micronutrient for plant life, much less is known about the role it might play or what it could be used for in other organisms – even people.

Using advanced techniques to study the interactions of boron including a new form of NMR spectroscopy known as DICE-NMR, the research team demonstrates how to introduce boron to proteins, as well as the broad range of potential applications it may have in the emerging area of chemically programming or editing biological function into biomolecules.

The study involved researchers from the UK and Belgium and is published in the journal Nature Chemical Biology. 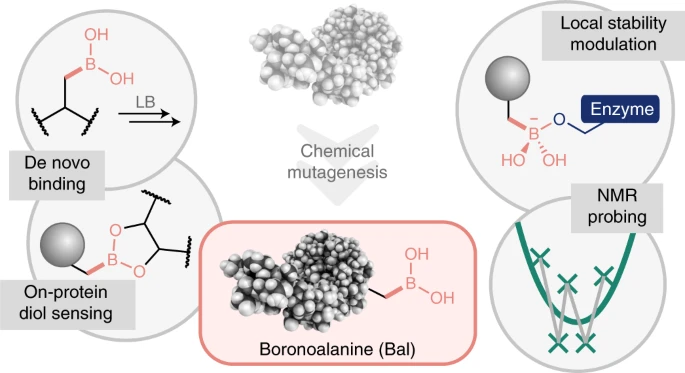 The addition of boron (known as borylation) to form Boronoalanine (Bal) allows for a multitude of new function, including de novo binding, on-protein diol sensing, protein stabilisation and NMR probing.

Senior author Professor Ben Davis, of the Rosalind Franklin Institute and Oxford University’s Department of Chemistry, said: ‘Our group has spent a number of years exploring the idea of inserting information into biological molecules such as proteins to alter their function. We’re using chemistry to edit this function and so deepen our understanding of biology, opening up all kinds of potential applications in medicine and therapeutics.

‘The work on boron stems from a curiosity about why the chemistry of life generally only uses a small subset of elements, and why a widely found element like boron that’s essential for plants doesn’t seem to have a clear role in human biology, beyond being classed as a probable micronutrient. So this paper takes that uncertainty about boron’s natural role and asks whether we can install it in a protein – and, if so, what does it do and is it useful?’

Boron acts as a Lewis acid – a term for a substance that can accept a pair of electrons to form a covalent bond. Its localization in biology tends to take the form of an oxygen-boron bond that makes it unstable and difficult for researchers to pin down and analyse. By making a carbon-boron bond, however, the researchers were able to ‘anchor’ the boron in their artificial system and investigate its behaviour, without losing the dynamism that makes boron potentially interesting and useful.

Professor Davis said: ‘The answer to the question of what boron can do if we introduce it into a protein is “lots”. It binds to other components, it stabilises protein structures, it can grab hold of things like cells, and it turns out it can even react to make other bonds. That’s probably just the starting point.

‘Some might argue that this is simply a quirk, but for me I think this work answers fundamental questions about what happens when you introduce a new Lewis acid to biology, and how Lewis acids are used in biology more broadly. There hasn’t been such a focused way of doing this before, so it’s a very new piece of chemistry that we’re bringing into biology. We could, in principle, do a huge number of things with this new chemical functionality, from using a structural mapping technique called oxidative footprinting on proteins, to instantly switching on and off particular enzymes to see what they do.’

The research was carried out in collaboration with NMR expert Professor Andrew Baldwin, who was recently seconded to the Franklin from his role at Oxford University.

Professor Davis added: ‘What I like about this research is that it brings together precision-editing techniques with advanced NMR spectroscopy methods, which is very much the signature of the Rosalind Franklin Institute. That combination of precise editing and the ability to use biophysics to understand the changing structure of a protein in a relevant context has given us an exciting new way of looking at biology that wouldn’t have been available with conventional methods.’