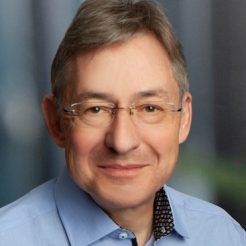 Mathias is the BHF Professor of Molecular Cardiology at King’s College London, whose research is focused the contractile structures of heart and skeletal muscles at the atomic and cellular level to understand the mechanisms of inherited muscle diseases.

Mathias obtained his MD from Heidelberg University in 1991, was then a post-doctoral fellow and visiting team leader (1996-1998) at EMBL Heidelberg, where he worked on his habilitation (MD PhD equivalent) in Biochemistry on titin-based sarcomere assembly at Heidelberg University in 1998. After nine years at EMBL, Mathias was awarded a Heisenberg Fellowship by the German Research Foundation and joined the Max-Planck-Institute of Molecular Physiology, Dortmund, as a group leader. He was appointed as Professor of Molecular Cardiology at King’s College London in 2002 and since 2008 holds the British Heart Foundation Chair of Molecular Cardiology. He is the Head of School of Basic and Medical Biosciences at KCL.

Mathias’ research has been supported by UK research councils (MRC, BBSRC) as well as the British Heart Foundation, Wellcome Trust, Leducq Foundation, Volkswagen Foundation, the EU and the European Research Council, and the German Research Foundation DFG. He has been awarded the International Society for Heart Research (ISHR) Outstanding Investigator Award in 2009 and was elected as a Fellow of the Academy of Medical Sciences (FMedSci) in 2010.