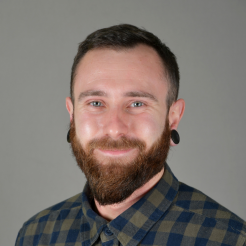 Stephen is the operations support technician at The Franklin. His role involves supporting the building team with the smooth running of goods in, labs and countless tasks put his way.

He has previously worked as a MLI technician for RAL Space where he first found an interest for the technology and scientific works on campus. His previous career was in sewer rehabilitation as a manufacture technician, working alongside water companies, contractors and members of the public.