A new toolkit to expand the use of Cryo-EM

Franklin researchers continue to develop nanobodies, antibodies derived from camelids, as tools for stabilising biological structures to allow for higher resolution single particle electron cryomicroscopy (cryo-EM) reconstructions. The team have been working in partnership with Vlaams Instituut voor Biotechnologie (VIB), who are world leaders in the production of nanobodies, to produce megabodies.

Megabodies are nanobodies which have been grafted onto selected protein scaffolds, and allow the formation of conformationally and functionally stable molecules. This addition of the protein scaffold increases the molecular weight of the structures and overcomes one of the main issues that limit the resolution of cryo-EM reconstructions – particle size. 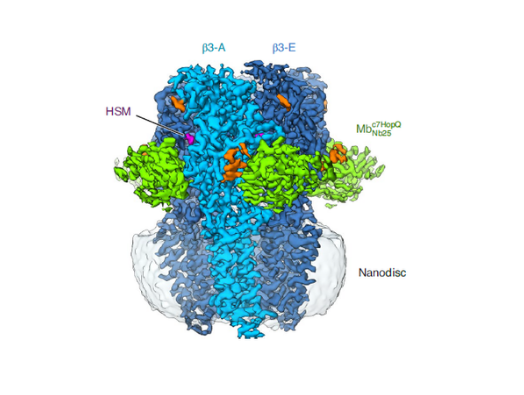 Previously it has been difficult for structural biologists to use cryo-EM when imaging small particles (100kDa or smaller) without the implementation of additional protein engineering steps. The use of megabodies will make the production of high resolution cryo-EM reconstructions for small particles easier and more efficient.

Professor James Naismith, Director of the Rosalind Franklin and co-author on the paper, said “Nanobodies are a great and versatile tool for structural biologists to improve their cryo-EM reconstructions and we hope that megabodies will be a great addition to that toolkit. It is great to partner with those at VIB, the pioneers of nanobodies, and we look forward to many productive collaborations in the future.”

The selection of different scaffold proteins and recognition domains of compatible geometries means that molecular weight can be increased whilst retaining the desired binding specificity and affinity.

Professor Jan Steyaert, lead author on the paper and Research Director of the VIB-VUB center for Structural Biology, said, “Megabodies make a brilliant addition to nanobodies toolkit and will expand the use of the cryo-EM technique. We were excited to have the Franklin researchers as part of the team, given their strong focus on protein sample production, and hope to continue to work closely in the future.”

The researchers have also demonstrated that megabodies can also be used to obtain three-dimensional reconstructions for membrane proteins that suffer from severe preferential orientation. Preferential orientation at the water-air interface of the sample has also been a major issue which has previously limited the ability of researchers to obtain full three-dimensional reconstructions, as it makes it difficult to image certain orientations of the membrane protein.

This work compliments a body of work being carried out at the Franklin as part of Protein Production UK (PPUK). PPUK is cutting edge national hub for protein sample production, the facility is developing new, efficient and effective methods for producing specimens, which will revolutionise how samples are produced, stabilised, delivered and transferred. If you would like any further details of this work or to find out how to collaborate PPUK, please get in touch.